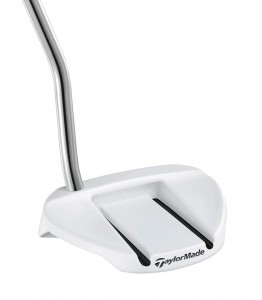 Similar to its Ghost Spider predecessor, the new Ghost Manta provides the performance benefits of a high-MOI (moment of inertia) putter, but is packaged neatly in a more traditional one-piece neo-mallet shape that is sure to appeal to a wide range of golfers.

“The Manta takes a very clean and classic Tour-proven look, along with an advanced and modern technology that often comes in a quirky head shape, and combines them into one comprehensive putter,” said Michael Fox, global product manager, putters and wedges. “The result is a putter that is powerful for players of all levels, while also providing confidence while on the green.”

The Ghost Manta’s white head contrasts sharply with the turf to make it dramatically easier to determine where the face is aimed. In addition, the Ghost Manta’s white finish helps golfers align themselves to the putt more easily, as well. A study of thousands of putting strokes using TaylorMade’s proprietary MAT-T (Motion Analysis Technology by TaylorMade) System revealed that 65 percent of golfers fail to square the putter face to the target from 12 feet, leading to inaccurate putts and higher scores.*

An update to its Ghost predecessors, the Ghost Manta features a new flat matte white finish which eliminates the distractions of glare and “hot spots” caused by reflected sunlight, making it easier for the player to focus his or her full attention on aiming the putter accurately and executing a sound stroke.

Key to the alignment performance of the Ghost Manta is its wide-bodied frame, which features two black rails on the top of the putter head that frame the golf ball and contrast with the white top to help improve alignment and visibility.

Additionally, all of the putter’s technology, including its two 50-gram tungsten stabilizing weights and user-adjustable weight in the center, are hidden on the sole of the putter to help the golfer maintain focus. The Ghost Manta features a new double-bend shaft, which provides the correct amount of offset without the shaft distracting from the putt.

TaylorMade teaching professional and renowned putting guru Dave Stockton helped develop the Ghost Manta, as he did with the original Corza Ghost and the entire TaylorMade Ghost series family.

Weighting system provides high MOI
The Ghost Manta features two 50-gram tungsten weights on the heel and toe of the sole, which are designed to stabilize the putter and increase MOI. This high MOI produces consistent speed on off-center hits. There is also a third user-adjustable weight in the back-center of the sole (additional weights may be purchased separately). The stock 33 and 34-inch putter heads weigh 360 grams, whereas the 35-inch putter head weighs 370 grams and the belly putter head weight is 380 grams. The head weight of the Ghost Manta long version is 440 grams.

Improved Alignment Elements
The Ghost Manta putter has two alignment elements: the leading edge and the dual alignment lines. The leading edge contrasts highly against the white surface of the putter and the green itself, while the alignment lines are painted black to maximize the golfer’s ability to see these elements clearly and use them effectively to aim the putter. Both of these high-contrast alignment elements give the golfer the best possible chance at effectively aiming the putter.

Availability and Pricing
The Ghost Manta is available at retail on March 23, 2012. MSRP is $179 for standard-length center-shaft versions, and $199 for belly and long putters.

*65% claim is based on player data from TaylorMade’s MATT System.

Will be avaliable in normal, mid length and long length and standard position shaft and centre shafted.