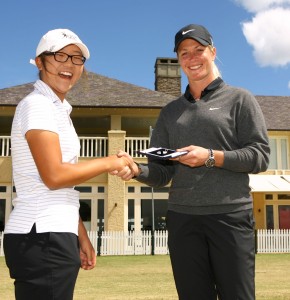 Pettersen, in her role as an R&A Working for Golf Ambassador, made the presentation during practice at the LPGA Tour sanctioned ISPS Handa Women’s Australian Open at Royal Melbourne where 14-year-old Ko will be taking on the world’s best players.

The R&A and United States Golf Association (USGA) award is in recognition of Ko’s success in 2011, however, her performances in recent weeks have made headlines around the world.

Now in her 42nd week on top of the WAGR, the South Korean-born New Zealander last month became one of the youngest ever winners of a professional tour event with a four-shot victory in the Women’s New South Wales Open. January also saw her become the youngest winner of the Australian Women’s Amateur following a second place finish in the Australian Women’s Stroke Play Championship.

Ko, who discovered earlier this week that winning the McCormack Medal has secured a place in the U.S. Women’s Open, said: “It is an amazing honour to be the first ever recipient of this award, and follow the footsteps of fellow Kiwi Danny Lee. This award sure was the cherry on the top for an amazing year for my team and me.

“To receive it from a Major winner such as Suzann Pettersen makes something amazing even better. She is someone I have looked up to throughout my career and to be here competing against her this week is going to be real fun!

“I could not in my wildest dreams have expected the start to 2012, I mean 2011 was crazy, and this is even better. I can’t wait to tee it up this week and test myself against the very best in the women’s game. This is where I want to be when I grow up, so to be able to do it when I am 14, it’s going to be real cool.”

A pupil at Pinehurst School, Auckland, Ko burst onto the international stage at the age of 12 when she finished leading amateur in the 2010 Pegasus New Zealand Women’s Open. She tied for seventh, and in the process became the youngest woman to make the cut in a Ladies European Tour event.

Pettersen, who hosts the Suzann Junior Challenge event in her native Norway, was delighted to spend some time with one of the game’s rising stars.

The 2007 LPGA Championship winner said: “Like everyone else I have been hugely impressed with Lydia’s success. What she has already achieved at the tender age of 14 is completely unprecedented in our sport.

“Her all round game is incredible but what has impressed me the most is the way she has taken success in her stride and kept a down-to-earth attitude.

“I am sure she will remain at the top of the WAGRanking for a long time to come and will enjoy a long and successful career. I will be watching her closely this week!”

Today’s presentation follows a successful first year for the women’s WAGR – overseen by the USGA and The R&A – which was launched in February 2011 following the success of the men’s ranking, now in its sixth year.

USGA Executive Director Mike Davis said: “As the first female recipient of the McCormack Medal, Lydia Ko has secured her place in the history of women’s amateur golf. Her success to date shows that we can expect to see much more of her in the years to come.”

The WAGR is the first time the women’s game has been able to compare international amateur player performance in elite competition and it currently includes a calendar of 1,750 counting events with around 3,500 ranked players representing 84 countries.

The women’s ranking is quickly catching up with the men’s which now encompasses more than 2,500 counting events and, more than 6,000 players representing 100 countries worldwide.

Michael Tate, The R&A’s Executive Director – Business Affairs, said: “Lydia Ko enjoyed a wonderful 2011 but has already eclipsed those achievements just a matter of weeks into 2012 and I am confident she will continue to make history long into the future.

“We are delighted to have her as the first female winner of the McCormack Medal.”

The medal, as with the men’s equivalent, won in 2011 by USA’s Patrick Cantlay, is awarded to the female player ranked number one in the WAGR after the U.S. Women’s Amateur Championship, the last elite women’s WAGR event of the amateur season.