Double up with the The Double Duty™ divot repair putter – save your greens and your back! 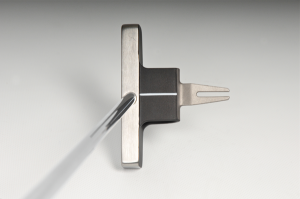 Ever felt like you are too sore or too tired to bend down and repair your pitch marks on the green? Well now  you don’t have to bend over any more…

Six years ago, Walter Graves began work on an idea he had that eventually became Double Duty™, the divot repair putter.  After an illness, Walter realised that he was unable to bend over to repair ball marks on the greens when playing golf.  Since golf had played a large part in his life, and he prided himself on practising proper golf etiquette, a resolution to this problem became very important to him.
Walter decided there was a way to permanently attach a divot repair tool to the putter head so that he could repair his ball marks to insure the integrity of the putting surface.  The first design was submitted to the USGA for review and it was determined that the design did not meet the “plane of sight” requirements.  After many design trial and errors Double Duty™ was perfected.

A wooden mock up of the putter head was submitted to the USGA for review and they determined that the club, as designed, would meet their requirements.  The next hurdle was finding a manufacturer that would produce a prototype to be submitted to the USGA.  After much searching, Infiniti Golf agreed to help.  The wooden mockup was sent to them and after a few modifications, due to weight, the final putter head was born.

The Double Duty™ divot repair putter is made of 431 stainless steel with a 72° shaft angle, with a 35 ½” shaft, 360 gram head weight,  swing weight of F2 and 3° face loft.  Both professionals and amateurs have used the putter and are very impressed with the way it feels and the true roll of the ball off the club face.

The Double Duty™ divot repair putter was submitted to the USGA for final approval and it was deem that the club met the standards of the Rules of Golf.  As well, the putter head design has received its final patent approval and the name has been trademarked.  Each putter comes with a head cover and instructions on proper use.