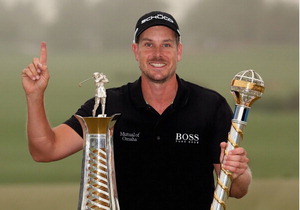 BASINGSTOKE, Hants. (18 November, 2013) –  played the TaylorMade SLDR driver en route to winning the season-ending DP World Tour Championship. The win was significant for Stenson as he became the first golfer to win the PGA Tour’s FedEx Cup and the European Tour’s Race to Dubai in the same season.

Stenson first switched into the SLDR (10.5) at East Lake where he won the Tour Championship. On the range that week, TaylorMade Tour reps built Stenson a 10.5 SLDR and as expected, Stenson was able to knock off 400 RPMs of spin and averaged 10 yards longer on the launch monitor. The more distance with a higher-lofted club is possible because of the SLDR’s low and forward centre of gravity.

Since the switch into the higher-lofted SLDR, Stenson has finished strong and capped a historic season.

The win represented the eighth worldwide win for the new SLDR driver.

TaylorMade was the No.1 driver brand at the DP World Championship.