BASINGSTOKE, Hants. (25 November, 2013) – After nearly withdrawing due to the devastation caused by Typhoon Haiyan in the Philippines which included the loss of eight of his relatives, TaylorMade-adidas Golf Tour staff professional Jason Day played his first tournament in five weeks with a heavy heart. Day stayed strong, winning the ISPS HANDA World Cup of Golf over a group of the world’s top players at the Royal Melbourne Golf Club in Melbourne, Victoria, Australia. With a final score of 68-70-66-70-274, Day, playing TaylorMade equipment and wearing adidas Golf apparel and adizero Tour footwear, was consistent off the tee with the R1 driver and precise around the greens en route to an emotionally-charged two-shot victory. 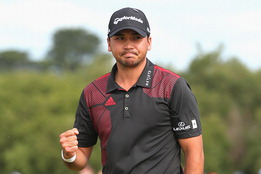 Battling windy conditions and pressure from some of the top players in the world, Day made the most of his one-shot lead at the start of the final round, holing out for eagle on the sixth hole and never looked back. The win marked the fourth career professional victory for Day and his first since winning the 2010 Byron Nelson Championship. In addition to winning the individual title, Day also captured the team portion of the World Cup as a member of Team Australia.

What is In the Bag: