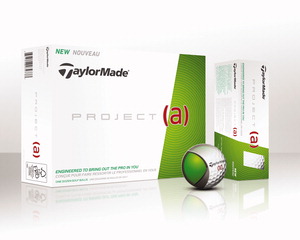 BASINGSTOKE, Hants. (25 February, 2014) – TaylorMade Golf Company announced PROJECT (a), a golf ball engineered to promote more spin and improved performance where amateurs need it most, into and around the green.

The “a” in Project (a) stands for “amateur,” and the reason for its creation is simple: Amateur golfers generate less spin than Tour professionals. Project (a) is designed to deliver more spin on mid irons, short irons and shots around the green; resulting in enhanced control and increased scoring opportunities.

“Having gathered data from many player types including Tour pros, it’s no secret that amateurs need help generating spin and stopping the ball on the green,” said Dean Snell, vice president of golf ball R&D. “Our tests indicate that amateurs miss the pin by an average of 35 yards on a 150 yard approach shot. Playing Project (a) gives amateur golfers a better chance at stopping the ball on the green, creating better scoring opportunities.”

In addition to delivering excellent spin performance, the Soft Tech cover also provides an even softer feel around the greens than previous TaylorMade offerings. The ball’s durability provides higher resistance to shearing.

While Project (a) spins with great veracity on shots into the green, it’s also engineered to spin low off the driver to promote longer and straighter drives.

• REACT™ Core for greater ball speed on all shots for increased distance.
• Spin Mantle™ designed to deliver precise and consistent spin rates on given shots throughout the bag.