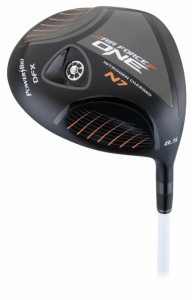 Palm Desert, CA – PowerBilt’s brand-new Air Force One DFX driver hasn’t even hit the market yet, but it’s already received some media love. In its Most Wanted Driver of 2014 article, esteemed golf media outlet MyGolfSpy rated the Air Force One DFX fifth among all new-for-2014 drivers.

In summary, the website reviewer wrote: “Surprise, surprise, surprise (I’m not actually surprised), here’s the PowerBilt Air Force One rounds out our top 5. The numbers were excellent among our lower swing speed players, and we think we probably could have done better at the higher swing speeds too. You won’t find many companies who offer a better selection of stock shafts, and you won’t find many heads that perform better either. Joke all you want about the Nitrogen, this one is legit.”

The Air Force One DFX features Nitrogen N7 “Nitrogen Charged” technology, a newly patented method to reinforce the clubface without adding any weight. The forged titanium body comes with titanium cup face technology, as well as aerodynamic clubhead shaping. It’s available in both the high MOI and Tour Series, in lofts of 8.5°, 9.5°, 10.5° and 12.5°. Standard shaft length is 45 ½”. The club is offered in several leading shaft models from the top OEM shaft brands, so that golfers will achieve the optimum launch angle and spin rate for their unique swing. MSRP starts at $299.99, and there is an upcharge for some shaft models.

“We’re flattered that people are already taking notice of how well our Air Force One DFX driver competes with the market’s biggest names,” says Ross Kvinge, President of PowerBilt. “There’s no question in my mind that this driver has earned that credibility, as MyGolfSpy’s testing proves.”

Since 1916 PowerBilt Golf has designed golf clubs the world’s best have used to win such tournaments as The Masters, the U.S. open, and the PGA Championship. today, PowerBilt is pushing the limits on technology with REAL innovation. USGA Conforming, Air Force One woods feature Nitrogen Charged Club Heads, faces as thin as 2.6mm, the largest sweet spot in golf, and maximum COR regardless of swing speed. And all Air Force One woods feature customized speed-rated shafts from Fujikura. New Nitrogen Charged Air Force irons also feature the hottest and thinnest face in golf. PowerBilt also remains the No. 1 choice for junior golfers; and the PowerBilt Air Force One irons were named to the 2011 and 2013 Golf Digest Hot List. Plus One Sports, Inc., is the U.S. licensee of the PowerBilt brand. PowerBilt is a division of the Hillerich & Bradsby Co., a family owned-company which has been making golf clubs since 1916. Based in Louisville, Ky., Hillerich & Bradsby is also the maker of the world-famous Louisville Slugger bats and Bionic gloves.