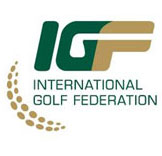 21 August 2014, Nanjing, China: Italy’s Renato Paratore overturned a three shot deficit at the start of the day, moving from fifth to first, to win Gold in the Men’s Individual Stroke Play Golf Competition at the Youth Olympic Games in Nanjing.

The young Italian shot 66, meaning he was 11-under-par for his last 36 holes, to beat Sweden’s Marcus Kinhult into second place.

Paratore, ranked fifth in the World Amateur Golf Ranking, birdied the 17th and 18th to go from being one behind to one in front and then had a nervous wait as Kinhult came down the 18th.

“I played really good on the long game and putted well today,” he said. “I knew I was one off the lead when I was playing 17, so I knew I had to make two birdies to win. I was really pleased to make the birdies, one from ten metres and one from six.

“I was nervous watching Marcus playing the last hole but it is really nice to win the Gold Medal. My father is here and he is really excited for me. I can’t believe it. I’m very happy.”

Marcus Kinhult of Sweden, ranked just one place behind Paratore in the World Ranking, shot a final round 69.  It moved him up from Bronze Medal position to Silver but with just two holes to go he was in Gold Medal position.

“It feels good of course, I wanted to win, but Renato was better. He deserves it,” he said.

“I saw the leaderboards on the 10th tee. I thought I have to play the back nine in two-under-par to have a chance. I didn’t quite manage it.  I knew I had to make the final putt to force a play-off but I hit a bad putt.

“I have really enjoyed the Youth Olympics on and off the course, especially being in the village. That’s definitely cool. Being a part of the history, that’s cool too.”

Thailand’s Danthai Boonma started the day in second and shot 73 and looked set to miss out on a medal until Norway’s Victor Hovland bogied the 18th meaning the two players would play-off for the Bronze Medal.  It took two trips down the 18th to separate the pair but following a poor tee shot Hovland missed the green short right while Boonma hit it pin high to 10 feet.  Hovland couldn’t get up and down, allowing Boonma a simple two putt for Bronze.

“I’m so happy to get a Bronze Medal. I was pretty confident in the play-off but Viktor is a good player and he put some pressure on me.

“I had to dig deep to find a way to beat him.  The medal is very important for me, and I believe the Thai people will like it.”