Precision Is Back With The New Ft. Worth 15 Irons From Ben Hogan Golf Equipment 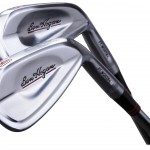 FORTH WORTH, TEXAS- – Ben Hogan Golf Equipment Company announces its return to golf with the introduction of the new Ft. Worth 15 irons – the most accurate and forgiving Ben Hogan irons ever, giving more golfers the ability to be a “Hogan Player” once again.

“We are excited to have the opportunity to bring back to the golf industry one of the most iconic brands in golf equipment,” said Terry Koehler, President/CEO of the Ben Hogan Golf Equipment Company. “When Mr. Hogan started his company in 1953, he did so to ‘design and manufacture the best clubs in golf’ with ‘the most exacting tolerances and standards’. With the Ft. Worth 15 irons, we feel we have again done exactly what Mr. Hogan originally set out to do.”

Forged from premium 1025 Carbon Steel, the new Ft. Worth 15 irons offer the ultimate performance, feel and sound that Mr. Hogan would have demanded while embracing industry-first technologies such as the Precise Loft™ System and HoganFitTM to give golfers a level of precision never before seen in the game.

The Precise Loft ™ System re-defines precision and challenges conventional iron set make-up. Each Hogan iron and wedge is built to a specific lofts rather than a traditional number. The new Ft. Worth 15 irons and TK 15 wedges are available in unprecedented 44 lofts, from 20 degrees to 63 degrees.

“It’s time to challenge conventional wisdom about irons,” said Koehler. “Today, 6-iron lofts can range from 26 to 35 degrees, so how could a golfer ever make a fair and accurate comparison? Over the years lofts have gotten increasingly stronger, so that today a typical 6 iron can have even less loft than a 4-iron in Mr. Hogan’s playing days. This relentless quest for distance has caused golfers to have huge yardage gaps where they need to be more accurate-in the scoring end of the set. The new Ben Hogan Ft. Worth 15 irons and TK-15 wedges fix all that.”

The HoganFit™ system is set to become the benchmark for precision fitting in irons and wedges. With loft options ranging from 20 degrees to 63 degrees, Ben Hogan Golf Equipment is uniquely positioned to offer each golfer a precisely calibrated set of irons that fits their swing profile and launch angle tendencies. Only Ben Hogan Golf Equipment can optimize a golfer’s set to provide consistent gapping throughout their bag to give them the best opportunity to improve their game.

“We believe it’s the way Mr. Hogan would have done it,” said Koehler. “It’s all about bringing precision back to iron and wedge play.”

Additionally, the new Ft. Worth 15 irons feature an optimal perimeter weighting design that distributes the mass around the primary impact area of the face for greater forgiveness and more consistent distance, even on off-center hits.

“It really is the best of both worlds,” adds Koehler. ” The Ft. Worth 15 irons prove that you can have the forgiveness of a game improvement iron without sacrificing traditional looks. This perimeter weighting design makes a precision iron playable for a much larger segment of golfers than ever before.”

As with all new clubs from Ben Hogan Golf Equipment, the Ft. Worth 15 irons feature Hogan’s V Sole design, which utilizes an increased leading edge bounce to compliment the lower main portion of the sole. The visible V shaped sole delivers greater versatility and better shot-making from a multitude of lies. This compliments the progressive weighting system utilized in the new Ben Hogan Golf Equipment irons to deliver optimum trajectories and spin to give the precise distance control sought by players of all skill levels.

The Ft. Worth 15 irons will be begin shipping in April 2015 and will be custom built to order. With either the KBS Tour V or KBS Tour 90 steel shafts, the Ft. Worth 15 irons retail for $150 per club. They will also be offered with UST Mamiya Recoil shafts as the standard graphite offering at a retail price of $165 per club. The company also offers an extensive list of custom shafts and grip options.