The design is a classic driving head – simple – it has no weight, loft or lie adjustment system : A pure driving club. Coupled with the standard 65 gram Apollo Tour Flight Shaft the club is not heavy at all – quite light. The Air Force One DFX  incorporates aerodynamic design and there is a feeling that you can swing this club fast! The lightness of the club has allowed Powerbilt to make the face quite large, therefore easier to hit with its maximum forgiveness.

The colour is black (PVD) with geo metric lines at around the back perimeter of the club head that helps the define the shape. The Air Force One DFX driver also has a white crown alignment aid to find the center of the club to line up the ball, some manufacturers tend to forget to add that to their clubs, an important part of a player’s golf set up. The driver sits very square to the ball and the 460 CC  head  does not appear that large. Wearing black helps you to look thinner and slimmer – this is another example!

The sound of the Air Force One very good – not a tinny sound that you can hear from a lot of other drivers. A solid crack at impact with a slight muffled tone. If you hit the center of the club you are not going to burst your hear drums! There feels like a lot energy coming off the face of the club as the ball is struck. A definite zing off the face!

The shaft that I was testing with was the standard 65 gram mid kick point and the results were quite pleasing. I hit 20 balls and 16 would have been in the fairway. To be honest I was not swinging well that day. When I test clubs I like to hit my own gamers in between shots to see how I am swinging, and my own driver was not behaving that particular day. The N7 was quite easy to hit and the flight for me was mid to low, actually good for the conditions. I tend to be a lower ball hitter. In fact a couple swings felt terrible (off the heel) and when I looked up I was surprised to see them sailing just off the center of the fairway and long. This may have something to do with the low CGI and consistent face thickness. There are shaft upgrade options to suit your swing speeds. 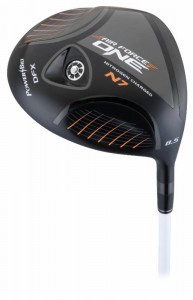 DFX stands for Deep Face Extreme. Once the golfer stands over this driver, They will see the difference. The clubface is now 5 mm deeper than the previous version, which catches the ball at impact slightly longer and combines with the nitrogen inside the clubhead to create reduced spin and more distance.

“We reduced the nitrogen pressure to 80 pounds, for better impact feel,” says Ross Kvinge, President of PowerBilt. “This new amount of nitrogen generates a tremendous trampoline effect for increased ball speed. In fact, now the trampoline effect is up to the USGA maximum limit. Shot dispersion is also the tightest ever in our drivers. And by adding 6 grams low and forward in the clubhead, we moved the CG lower and more forward than in any other Air Force One driver. We did this to appease our clubfitters who requested a better smash factor. I can confidently say that this is the most solid driver we have ever produced.”

PowerBilt’s patented Nitrogen N7 “Nitrogen Charged” technology makes its debut in the Air Force One DFX driver, as well; it’s a newly patented method to reinforce the clubface without adding any weight. That means every golfer can benefit from maximum C.O.R., maximum C.T., maximum trampoline effect, and maximum smash factor for incredible distance.

The Air Force One DFX features a forged titanium body with titanium cup face technology, as well as aerodynamic clubhead shaping. It’s available in both the high MOI and Tour Series, in lofts of 8.5°, 9.5°, 10.5° and 12.5°. Standard shaft length is 45 ½”. The club is offered in several leading shaft models from the top OEM shaft brands, so that golfers will achieve the optimum launch angle and spin rate for their unique swing. MSRP starts at $299.99, and there is an upcharge for ultra premium shaft options.

Golf media have already taken notice of the Air Force One DFX driver. MyGolfSpy tested it, and reported: Surprise, surprise, surprise (I’m not actually surprised), here’s the PowerBilt Air Force One rounds out our top 5. The numbers were excellent among our lower swing speed players, and we think we probably could have done better at the higher swing speeds too. You won’t find many companies who offer a better selection of stock shafts, and you won’t find many heads that perform better either. Joke all you want about the Nitrogen, this one is legit.”