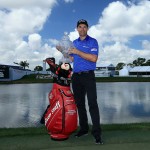 CHICAGO, March 2, 2015 – Wilson Advisory Staff member Padraig Harrington (@padraig_h) clinched a win at the Honda Classic on the second hole of a sudden death playoff and secured his spot at Augusta in April.

Harrington rode the hot hand of his Wilson Staff Infinite South Side putter on the back nine, rolling in four birdie putts outside thirteen feet, including a 16-footer on hole 18 to send it to a playoff.

“I found that mental edge again,” he said after striking it to three feet on the 190-yard par-3 17th playoff hole. “My putting is reliable thanks to a recent equipment change to the Infinite South Side putter.”

After claiming his 29th international victory at the Indonesia Open in December, and remaining on top of the leaderboard throughout this week’s event, Harrington will head to Augusta in April to compete for his fourth major championship.

“We are proud to congratulate Padraig on winning the Honda Classic,” said Tim Clarke, President of Wilson Golf. “As a team, we understand the personal standard he sets in regards to professional performance and feel it relates directly to Wilson Golf and the rest of our Advisory Staff.”

History does repeat itself, as Harrington sealed the Honda Classic in 2005, also in a playoff. This win comes two months after he re-signed a multiyear deal with Wilson  Golf and marks his sixteenth year as an Advisory Staff member.