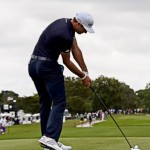 BASINGSTOKE, Hants. (9 March, 2015) – Dustin Johnson overcame the world’s best golfers at the revamped Trump Doral layout to claim the WGC-Cadillac Championship. Trailing by five shots going into the final round, Johnson wore the new adidas Golf adipower boost shoe for the first time. Using the speed from his AeroBurner TP driver, Johnson overpowered the difficult layout to claim his ninth PGA Tour title. The American led the Championship’s driving distance with an average of 328 yards with a 368 yard drive clocked up earlier in the tournament.

· Johnson’s win is the first for TaylorMade’s new AeroBurner Driver, the fastest, most aerodynamic driver in company history – Johnson plays a 9.5* TP with a Fujikura Speeder 661 X. With AeroBurner, Johnson has increased ball speed by 3 mph over his SLDR driver

· Johnson first added TaylorMade’s prototype Tour Preferred EF wedges (a 56* & 60*) at the Northern Trust Open, and added the 52* to his arsenal this week in Miami· Johnson’s win is the third win for adidas Golf’s new adipower Boost footwear, having also been worn by Jason Day and Brandt Snedeker in their victories earlier this season

· With the win, Johnson moves up 39 spots to 3rd in the FedExCup standings· Johnson has now won at least one PGA TOUR tournament per season since 2008