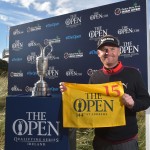 In blustery and showery conditions at Royal County Down in Northern Ireland, the leaders struggled to hold their ground in the final round and Denmark’s Kjeldsen, England’s Pepperell and Austria’s Bernd Wiesberger, who was already exempt for The Open, finished tied on two-under-par for the championship before going into a play-off.

In the end, Kjeldsen birdied the first play-off hole to win the play-off and joined Englishmen Pepperell and Hatton in securing the three places available in golf’s oldest Championship.

Kjeldsen, a three-time winner on the European Tour, led going into the final round but struggled with four dropped shots on his front nine. A birdie on the 12th steadied the ship but he dropped further shots on the 14th and the 17th to finish with a five-over-par 76. The 40-year-old will make his seventh appearance at The Open and his second in the Championship at the home of golf after he finished tied 37th in 2010. The Dane’s best finish in The Open was in 2009 at Turnberry when he finished tied 27th.Pepperell, who managed four top five finishes in five events on the European Tour last season, didn’t drop a single shot on his way to a final round two-under-par 69, which included birdies on the 8th and 13th holes.

The 24-year-old, who has one win on the Challenge Tour to his name, enjoyed a successful amateur career, representing England in the Eisenhower Trophy and playing for Great Britain and Ireland on three winning Jacques Leglise Trophy teams. He was runner-up to Tom Lewis in the 2009 Boys Amateur Championship at Royal St George’s. The Englishman played in the 2013 US Open at Merion but will make his debut in The Open at St Andrews. Hatton bounced back from three bogeys on the back nine to birdie the 17th and par the last hole to finish on a one-under-par total of 283 and a tie for fourth with Spain’s Rafael Cabrera-Bello. He secured the final qualifying place in The Open by virtue of his higher position in the Official World Golf Ranking. The 23-year-old will make his fourth appearance at The Open and his second at St Andrews after he qualified for the 2010 Open as an amateur. This is the second consecutive year that Hatton has secured a place at The Open through the Qualifying Series after finishing tied fourth at the 2014 Aberdeen Asset Management Scottish Open to secure a place at Royal Liverpool.

Key quotes: Søren Kjeldsen “It’s ridiculous. It’s like I’m dreaming and I don’t want anyone to wake me up. “I’m very excited, for us The Open is the best Major there is. I’ve been fortunate enough to play all the Majors but we feel like it’s our Open being European. Playing at the Old Course is going to be very, very special.”

Eddie Pepperell “This is something I can really look forward to for sure. I have been in St Andrews a lot in my amateur career and on Tour so to go back there for an Open Championship will be quite something. “I’m going to embrace the experience and hopefully go there with my game in good shape and you never know what can happen. “I grew up playing links in my amateur days so it’s something I’m very comfortable with when I’m playing well.”

Tyrrell Hatton “I definitely seem to have a way of finding my way into The Open and I’m happy to have done it again. “My first Open I felt I was quite unlucky with the draw and it was quite difficult but this is my fourth Open and I feel like I know what to expect now. Sadly I haven’t been able to make the cut yet but hopefully this will be my year. “Obviously I’m very happy about qualifying for The Open. I was lucky enough to qualify for my first Open when I was 18 and that was at St Andrews so to be going back five years later is fantastic. It’s a great place and I just can’t wait to get back there.” For scoring and more information please visit TheOpen.com.