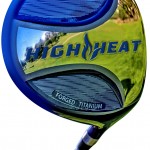 After a day of demo testing against major brands, High Heat was the highest-finishing driver in “ING Conference Best Product” voting by attendees at this annual gathering of golf media and golf industry executives.

The conference was conducted at Mission Inn Resort near Orlando, and attracted approximately 160 people from all over the country. Golf media and representatives from over five-dozen companies and organizations, including major equipment companies such as TaylorMade and Nike Golf, were in attendance.

The High Heat 460cc driver was designed by Dean Knuth, who was a Senior Director at the United States Golf Association for over 16 years. He created High Heat with amateur men and women golfers in mind, because they need a driver that is designed for them rather than the Tour pros who have different performance needs. He did so with his Optimal CG Game Changer and Fire Zone Face Technologies. High Heat was previously recognized as the “BEST NEW DRIVER” at the 2015 PGA Merchandise Show.

Noted sportswriter Gary Van Sickle of Sports Illustrated and Golf.Com called High Heat “the most significant technological innovation in golf equipment from this year’s PGA Merchandise Show,” adding that High Heat is “a game changer,” and “an advantage for amateur golfers.”

High Heat was the only driver from the PGA Show named to at least four top products lists from various media who covered the show.

Since the PGA Show launch, the reviews have been consistently and overwhelmingly positive:

“WOW, WOW, WOW. Longest club I’ve hit in a long time. Sweet-spot feels is orgasmic. The last time I was this excited was being at the first test flight of the B2.”
–Peter Manley, Arizona

“Love the look and feel. It performed as advertised. I hit 25 balls with the High Heat driver. 22 balls were straight, high and long. The near 90% success rate was well in excess of the 40 to 50% success I have experienced with my other driver. Plus I gained 10 plus yards on the High Heat drives versus my other drives. Very impressed. And I love the sound.”
–Paul Taylor, Canada

“I have played three rounds with my new High Heat. It is the best driver I have ever hit. The ball goes straighter and longer than my Taylor Made SLDR Driver. Thanks for increasing my enjoyment of game.”
–Admiral Bud Edney (Former Supreme Allied Commander of NATO) California

“I have been using my High Heat driver now for a little over three weeks. My handicap is down from a 16.2 index to a 14.5.”
–Bruce Knuth (no relation to Dean) Colorado

“Played the weekend with it. What an amazing club. I was keeping up with the guys a lot younger in my group.”
–Ed Brzezowski, Exton, PA

“High Heat is a winner. My brother Mike and I played your driver in the Ark Four Ball and made it to our flight finals for the first time. We both drove the ball farther and better than the previous five times we played. What made this so amazing is that we only had the clubs two weeks. Mike had played one round with it before our qualifying round. We are only going to get better. We got many compliments on the look, too.”
–Stan Halter, Arkansas

“I am a golf junkie. I try all new drivers. I played High Heat and never missed a fairway and of course the distance was awesome. According to FlightScope, High Heat was at a minimum 20 yards longer than my current driver. I’ve never hit a driver off the deck successfully, but with the low CG I figured it should work AND it did. I love this driver and I applaud Dean for the engineering that went into its design!”
–David Rosow, Connecticut

“Driver received, hit at range yesterday and used on course today.
It was worth the wait, good shots better and bad shots not as bad. Very happy with purchase.
It took a while to not align for fade, hitting straight is a whole new concept. Thanks.”
–Kevin Henry, California

“I received my initial High Heat driver a couple of weeks ago and I love it! I’m a pretty active purchaser of clubs and I think the High Heat is the first driver I’ve ever bought where I could see an immediate and significant improvement in distance, accuracy and roll. I like it so much that I ordered two more, one for my “travel bag” and another for my second home.”
–Mitchell Kertzman, Montana

“Used the driver in my first tournament of the year. Took third net. It was pretty funny because out of the first three holes (best ball), I went birdie, par, par and one guy threatened to call a course official to rerate me on the spot because he said no way I was a 16. One drive measured 270. I don’t think I ever hit something 270.”
–Raymond Royce, Alaska

“High Heat’s lower CG is very important,” said Knuth. “Amateurs regularly hit in the area above High Heat’s CG which is below the major brands’ average CG location. Tests have proven that drives are longer when hit above a driver’s CG compared to hitting below the CG.”

Knuth Golf’s Fire Zone Face Technology includes a unique face with a combination of seven different zones of variable thickness, including patented “parabolic” lobes at the top of the toe and heel of the face. This increases spring-like effect across the entire sweet spot zone while still conforming to USGA Rules and increasing the accuracy of High Heat.

For more information, or to order a High Heat driver, visit knuthgolf.com.