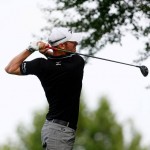 Norcross, Ga. (June 16, 2015) – Mizuno Brand Ambassador Chris Wood claimed his second career European Tour title by carding a final round 67 and overcoming a five-shot at The Lyoness Open in Austria. Utilizing a myriad of Mizuno’s award-winning products, including JPX-850 Driver, JPX-850 Hybrids, MP-64 and MP-4 Irons along with MP-T5 Wedges, Wood finished a flawless final round that included five birdies and no bogies to shoot 15-under to win the tournament by two strokes.

“After injuring my wrist last October, I’ve felt my game coming around the past couple months and was confident heading into this week’s tournament,” said Chris Wood, Mizuno Brand Ambassador. “I played great all week and thought if I could shoot lower than a 68 on Sunday I’d have a chance, so obviously things went my way and a 67 was good enough for the victory.”

Wood was clinical off the tee with his driver and accurate with his irons and wedges all weekend, which allowed him to shoot 67, 69, 70 and 67 throughout the four-day tournament claiming a come-from-behind victory at Diamond Country Club.

“Chris has been exciting to watch this season, and it is great to see him deliver such a strong closing performance to deliver his second career European Tour victory,” said Chuck Couch, VP of Product Management, Golf Division for Mizuno USA. “Chris has worked on his game meticulously over the years and fine-tuned his equipment to be fit to perfection. Clearly all the work has paid off with his win over the weekend.”