GOOSEN SECURES HIS PLACE IN THE 144TH OPEN AT FINAL QUALIFYING 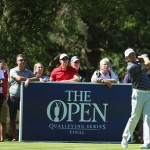 30 June 2015, St Andrews, Scotland: Major Champion Retief Goosen was among the 12 qualifiers for the 144TH Open at Final Qualifying today while Irishman Paul Dunne won the event at Woburn for the second year running to join four other amateurs in the field at St Andrews.

The 22-year-old Dunne, from Greystones, won by three strokes, as he did last year, following rounds of 70 and 65 on the Marquess Course which gave him a nine-under-par total of 135.

Two-time US Open champion Goosen overcame his fatigue, though, to come through a play-off to book his place on the course where he finished tied fifth in 2005 and sixth five years ago.

The 46-year-old South African, who had only four hours’ sleep after spending Monday in Germany following his tied fourth place finish at the BMW International Open, birdied the first extra hole against English pair Adam Gee and Jamie Moul after they had tied on five-under-par.

The other player to qualify was England’s Robert Dinwiddie, who finished second on his own at six-under-par and will finally make his Open debut after 16 attempts starting when he was only 15.

Two days after finishing runner-up at the US Senior Open in California, Colin Montgomerie, runner-up to Tiger Woods at St Andrews in 2005, missed out by four shots, however.

A year ago Dunne, who plans to turn professional later this year, was the only amateur to survive the 36-hole Final Qualifying, played this year at Hillside, Royal Cinque Ports and Woburn in England and Gailes Links in Scotland,but that was far from the case this time.

Balcombe, a 19-year-old from Bristol with a plus-three handicap, followed up his opening 67 with a 70 to finish on five-under-par at Royal Cinque Ports.

Taylor, 23 and a plus-five handicapper from Walton Heath, has just finished his studies at Louisiana State University and birdied three of his last seven holes for a 67, while Boyd matched Balcombe’s two rounds. It will be his third trip to The Open with his best finish coming in 2011 at Royal St George’s where he was tied 38th.

Among those who missed out there were former Ryder Cup player Paul Broadhurst, who in the 1990 Open at St Andrews shot a major record-equalling 63, and Scot Raymond Russell, joint fourth with amateur Justin Rose at Royal Birkdale in 1998.

Former conservatory fitter Young, from Longridge, near Preston, was pinching himself after securing his place in The Open at Gailes Links, with rounds of 68 and 70 for four-under-par to finish two shots clear of the field. He turned professional only last November and signed for an eagle and three birdies in his morning effort before mixing three birdies with a double bogey in the afternoon.

“I guess I love this place. Last year was a bit more of a shock because I had no expectations. This time I knew I could shoot the scores and that put more pressure on me.

“I’m delighted. It’s not really sunk it yet, but going to St Andrews will be ultra-special – probably the biggest week of my life.”

“I was in the clubhouse at Clevedon just before the Regional Qualifier (last week) and saw a picture of the 18th at St Andrews.

“I thought how great it would be to be a part of that. I’ve never played the Old Course, so I’m looking forward to the experience.”

“It will be a dream come true to play in The Open at St Andrews – where better to play in one?”

“I was shaking over my three-foot birdie putt (at the last). It was awful waiting around to see if I was going to get into a play-off and I think that’s why all the emotions have come flooding out.”

“This is massive. My first major at the Home of Golf – it doesn’t get any better.”

“I putted out really well from six feet and that’s so important down the stretch when you are trying to qualify for The Open. I knew that putt at the last was to go five-under and made myself hole it.

“I’ve just finished college and I might go to qualifying in America at the end of the year but this summer is about trying to make the Walker Cup at Lytham and making The Open at St Andrews as an amateur is a dream.”

“I first went to St Andrews as a 12-year-old with members from my club and it’s where everyone wants to play. It’s going to be very special.”

“I finished second in the St Andrews Links Trophy as an amateur in 2007 and played there in the Dunhill Links in 2009. It’s a very special place.”

“It’s awesome to make it into The Open. You hear so many guys talk about it. Rickie Fowler, who went to Oklahoma State where I’m studying business, speaks so highly of coming over here and playing in The Open Championship. When I was at Carnoustie for the Amateur we got to go to St Andrews for the day and it was awesome with all the stands and everything.”

The Open Qualifying Series continues this week with the Greenbrier Classic on the PGA TOUR and the Alstom Open de France on the European Tour.