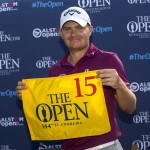 MORRISON, VAN ZYL AND CABRERA-BELLO QUALIFY FOR THE OPEN AT THE ALSTOM OPEN DE FRANCE

5 July 2015, Guyancourt, France: James Morrison, Jaco Van Zyl and Rafael Cabrera-Bello qualified for the 144TH Open at St Andrews after the final round of the Alstom Open de France today.

Three places in the Championship, played from 16-19 July, were available through the Open Qualifying Series at the event at Le Golf National, near Paris, for the leading three non-exempt players who finished in the top ten and ties.

Morrison finished on ten-under-par, three strokes behind the winner Bernd Wiesberger, who is exempt for The Open, to secure his place at St Andrews. The 30-year-old Englishman, who won his second European Tour title at the Open de Espana in May, shot a final round four-under-par 67 and will make his second appearance in golf’s oldest Championship after finishing tied 23rd at Royal Lytham & St Annes in 2012.

South Africa’s Van Zyl finished two shots further back in third place after a final round two-over-par 73 left him on eight-under-par for the Championship. The 36-year-old from Johannesburg, who played in the 2013 US Open at Merion and the USPGA Championship at Oak Hill Country Club the same year, will make his debut in The Open at the home of golf.

Cabrera-Bello achieved a remarkable turnaround after getting off to a poor start in the final round with a double bogey six at the 1st hole, a triple bogey seven at the 5th and a bogey at the 7th.

The 31-year-old Spaniard holed his second shot on the par four 12th for an eagle, birdied the next and then eagled the par five 14th. At the last hole, the two-time winner on the European Tour holed a 25 foot putt for a dramatic birdie which meant he had shot 29 for the back nine. That took him to five-under-par for the Championship and was enough to secure the last qualifying place. He finished two shots behind Germany’s Martin Kaymer, who is exempt for The Open.

“I cannot wait, it’s every boy’s dream. I played at Royal Lytham in 2012 but to play at St Andrews is even better. It’s the home of golf and I can’t wait to get there now. My goal was to try to have another go at it this week and I have done that. It is not easy to finish top five any week but to finish second and secure a place is even better.

“I love it at St Andrews. It is one of the only golf courses where you get that feeling. As soon as you turn up at St Andrews you have that amazing feeling in your body. I have seen all the videos and photos of the stands going up – it is going to be rocking.”

“It’s great. I played really, really nicely and securing a spot in The Open means a lot to me. It’s always great to be at St Andrews and the history is just absolutely phenomenal. Playing it in The Open is just going to mean so much more. It’s all going to be pretty new. I played in the US Open a couple of years ago but this is a very different feel and I am just looking forward to it.”

“It means a lot to me. The Open is my favourite championship in the world. I played the last three years, particularly at Muirfield, I really enjoyed it as I was up there contending for most of the Championship. I think my game is in really good form at the moment. It would be an honour for me to play The Open at St Andrews.

“I had a glance at the leaderboard (at the 18th) and tried to have a look to see who were the players who were possibly in and the ones who were not. Obviously there were players ahead and they had a few holes to play but on this course the last few holes tend to play quite tricky so I knew if I made it I might have a chance.”

The Open Qualifying Series continues with the Greenbrier Classic on the PGA TOUR today and next week with the John Deere Classic and the Aberdeen Asset Management Scottish Open on the European Tour.