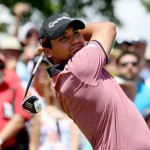 · Day’s win with the R15 driver is the 13th for TaylorMade Drivers in the full calendar 2014-15 PGA TOUR season (fifth for the R15). Day plays his R15 460 driver at 10.5* (set to lower) with a Mitsubishi Rayon Kuro Kage Silver 70x shaft. He has his weights centred for maximum distance. He averaged over 330 yards off the tee this week.

· With 70 (44.9% of the field), TaylorMade had more than double the amount of drivers in play than the next closest manufacturer.

· Day’s victory is the fourth for TaylorMade’s new Tour Preferred EF wedge. He recently switched to a 47*, 52* & 60* combination in the Tour Grind after previously playing the ATV Grind.

· After playing the RSi 2 through the season’s first Major, Day switched into the RSi TP irons, which he recently re-shafted with True Temper’s Dynamic Gold X7 shafts.

· Day plays the Tour Preferred X ball with the number 87; the year he was born. Long off the tee with superior greenside spin, Tour Preferred balls deliver unrivaled performance.