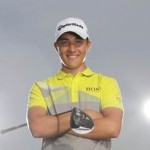 The victory in Finland sees Dominic climb to 19th in the Challenge Tour Order of Merit as he looks to secure a European Tour card for the 2016 season. With high-ranking events coming up at both the Rolex Trophy in Switzerland and the Kazakhstan Open, Foos is closing the gap on the Top 15 spot he needs to clinch his full card for next year’s European Tour.

Of the win, Foos said “This is a very special for me. I’m feeling great to have just won my first ever professional event, and my dad told me that I’m the youngest ever to win a Challenge Tour event, which is really amazing. It’s very special to share this with my father. We’ve had a couple of victories together before, but we put in so much hard work and for him to be there next to me as my partner and caddie is even more special. My mum has been here walking with me every hole, so it’s really something special having your parents here at your first professional win. It’s a dream come true.”

Sean Brady, Head of Sports Marketing at TaylorMade-adidas Golf said “We’re so pleased for Dominic. Over the past year we’ve watched his game grow and it was just a matter of time before he got this first win. Hopefully Dominic can now make a charge towards the Top 15 of the Challenge Tour in the remaining events this year!”

A TaylorMade Golf Staff Player, Foos has a full lineup of 2015 product relying heavily on both the R15 and RSi line-ups. The win was part of a stellar weekend for TaylorMade as Jason Day captured his first Major Victory in the PGA Championship.