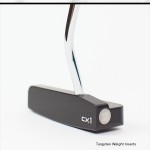 (Flagler Beach, FL) – Cure Putters “The Fastest Growing Putter on the Champions Tour” announced the introduction of its new Classic Series cx1 and cx2 putters today. Cure Putters has led the industry in delivering the Highest Moment of Inertia (MOI) in putters since launching in 2014; the new Classic Series delivers the incredible stability and forgiveness of a High MOI mallet in a visually stunning, traditional blade style putter. It’s the best of both worlds.

The initial launch of the Classic Series includes two new models: the cx1, a square back blade; and the cx2, a round back blade. These 100% CNC Milled aluminum putters are slightly oversized (5″ blade length) with tungsten weight inserts in the heel and toe, plus 42g of weight adjustability via 6 removable weights, providing a simple, traditional look at address, with twice the MOI and stability of a typical blade!

“We introduced the new Classic Series putters on the Champions Tour the week before the 3M Championship,” said Jim Barfield, Vice President of Tour Operations for Cure Putters. “The response was overwhelmingly positive and the following week at the 3M, 7 of the 81 putters in play were Cure Putters… In the twelve years I’ve been out here on the tour, I’ve never seen a new putter create such a buzz among the players and be put into play so quickly – that’s how good these new classic series putters are. The Tour Players said they love the look, sound and roll of the new cx1 and cx2 putters. They’re taking the Champions Tour by storm!”

Cure Putters is a golf putter manufacturer based in Flagler Beach, Florida. Guided by the principle that “Form Follows Function”, Cure Putters takes a no-nonsense, performance driven approach to putter design. Cure putters all feature an Extremely High MOI design, which is very stable and offers incredible forgiveness for much greater accuracy and distance control, even on extreme mishits. The adjustable weighting system allows a wide range of weight adjustability, allowing the golfer to find the perfect weight to suit their stroke and tempo. With a higher center of gravity, lower loft and deeper face that impacts the ball at the equator, Cure Putters deliver a superior roll – getting the ball rolling sooner, helping it stay on the intended line. Cure Putters’ innovative design takes several problematic variables out of the equation and offers incredible forgiveness and control, resulting in a tighter shot dispersion. Golfers of every skill level will putt more consistently, build confidence and achieve better results with a Cure Putter.

All Cure Putters are CNC milled from a solid block of T-6160 Aircraft Grade Aluminum and 100% Made and Assembled in the USA.