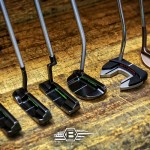 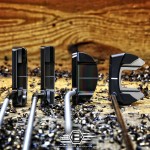 (TINLEY PARK, Il) – Bettinardi Golf – makers of the world’s finest milled putters and other golf products – has launched new putter models, colorways and technologies for 2016 including enhancements to the BB Series, expansion of the iNOVAi offering, and a classic addition under the Studio Stock banner.

Designed by Robert Bettinardi and an elite team of engineers, all putters are milled in the USA at Bettinardi Golf’s 40,000 square foot, state of the art manufacturing facility. Further details on new 2016 product extensions include:

• BB Series: This core collection gets an entire visual makeover for 2016 as each head receives a stunning Midnight Black PVD finish. The face retains a Hyper-Honeycomb mill pattern from a soft carbon steel, while paint accents of subtle silver and lime green complete the strong appearance. Each putter comes fit with a stepless, brushed nickel shaft for improved feedback and reduced glare. Models in the BB Series include BB1, BB1F, BB8 and BB40.

• iNOVAi 3.0: Bi-metal construction, black anodized finish and Bettinardi’s proprietary F.I.T. (Feel-Impact-Technology) Face are all found in the 3.0, the newest tour-proven shape to grace this series. Featuring a hand polished 303 stainless steel weight bolted to the aluminum body, precisely positioned for maximum M.O.I. characteristics, the 3.0 joins the original iNOVAi model for 2016. Each head design is available in standard or counterbalanced iterations and both are offered in either right or left-handed options. The 3.0 is also available as a center-shaft option.

• Studio Stock 6: This new addition to the Studio Stock family, which already includes the SS2 and SS16, is the direct evolution of classic putter design. The SS6, steeped in major championship lore, is a timeless silhouette associated with the greatest putters of all time. An Olympic Bronze finish and detailed Super-Fly Mill face milling is complimented by simple Legend Blue and white paint accents.

“At our state-of-the-art manufacturing facility located just outside of Chicago, Illinois, we design, produce, and deliver precision engineered putters to discerning amateur and professional golfers from around the world,” says Robert Bettinardi, President and CEO of Bettinardi Golf. “Craftsmanship, science, beauty and precision are words we live by, represented in each and every Bettinardi product.”

Beyond new additions, the following tour-proven Bettinardi lines remain in the catalog for 2016:

• Kuchar Models: A collaborative effort between Matt Kuchar and Bob Bettinardi, models KM1 and KM2HM take advantage of Armlock technology, a technique that is gaining popularity around the world as the anchoring ban takes effect in 2016. Featuring a Meridian Blue PVD finish and F.I.T. Face technology, removing 55% of the face material for a soft feel at impact, these putters have been used for multiple PGA Tour and international victories over the past few seasons.

• Queen B Series: Trusted by a 2015 PGA Tour winner and Presidents Cup International Team member, the Queen B Series contains two contemporary designs – the face-balanced, wide-body blade in the QB6, and compact round mallet in the QB7 – each with a compelling Savannah Blue finish and micro-Honeycomb face.

2016 models will be available for pre-order at Bettinardi.com and other premium retailers around the world. The new, 2016 Bettinardi models will land in stores January 16th, 2016.

About Bettinardi Golf
With years of experience milling highly technical parts for the defense and medical industries, Robert Bettinardi began his engineering passion for crafting the world’s finest putters in 1991. After creating his own prototypes, Bettinardi designed and produced putters for the next seven years alongside some of the industry’s best and was in demand by golf’s top OEMs.

Bettinardi Golf was born in 1998 and the company’s first milestone arrived that next year when a prominent PGA Tour professional set a tournament record at the Greater Greensboro Open. The seasons that followed would find Bettinardi putters used for numerous professional victories around the world, including a US Open and PGA Championship.

Today, Bettinardi Golf – comprising of more than 75 employees – remains committed to designing, crafting, and fitting One-Piece putters, wedges and accessories for players around the world.