JONES, PAMPLING AND CULLEN QUALIFY FOR THE 145TH OPEN IN AUSTRALIA 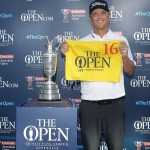 29 November 2015, Sydney, Australia: Matt Jones, Rod Pampling and Nick Cullen qualified for the 145TH Open at Royal Troon after today’s final round of the Emirates Australian Open in Sydney.

In the first event of The Open Qualifying Series, the Australian trio secured their places in next year’s Championship at Royal Troon from 14-17 July 2016.

Jones qualified in style by winning the Emirates Australian Open, finishing on an eight-under-par total of 276 for the championship, one shot ahead of Adam Scott and Jordan Spieth, who are both exempt for The Open.

Pampling finished a shot further back on six-under-par, three ahead of Cullen who tied on three-under-par with fellow Australian Lincoln Tighe but secured the qualifying place thanks to his higher position in the Official World Golf Ranking.

Sydney-born Jones, who is a member of The Australian Golf Club, which hosted the event, endured an eventful final round, including a triple bogey seven on the par 4 9th hole, but finished strongly with birdies on the 14th and 16th holes before calmly holing a four foot par putt on the last to seal victory. Jones, 35, will make his third consecutive appearance in The Open after finishing tied 30th at St Andrews this year.

Pampling started the day at four-over-par and a bogey at the first did not augur well but from there the Queenslander birdied nine of the next 16 holes before holing a putt across the length of the green on the last for a dramatic eagle for a ten-under-par, course record 61 that took him into the qualifying places.

The 46-year-old will make his ninth appearance in The Open at Royal Troon, where he finished tied 27th in 2004, his joint best finish in the Championship. Pampling came through The Open Qualifying Series at the Emirates Australian Open last year to secure his place at the 144TH Open at St Andrews.

Culllen mixed five birdies and four bogeys in his final round 68 but an eagle on the par five 14th hole helped him move to three-under-par for the championship. When former US Open champion Geoff Ogilvy’s challenge faded after dropping three shots on the last two holes to finish on one-under-par, the 31-year-old from Adelaide secured his second appearance in The Open after making his Major Championship debut in The Open at Royal Lytham in 2012.

“It’s one Major I would love to win, it’s one Major that I think suits my golf game the best. I’m absolutely ecstatic to get back to The Open. I have played it the last two years and to be able to qualify this early on means I can schedule around it and get ready for it.

“To know you’re in the event is fantastic. Peter Dawson let me start the event off last year and it was fantastic to have that honour.

“I’m delighted to get back there. Obviously it’s where the game started. The results haven’t shown it, but I really enjoy playing The Open. Hopefully this year, maybe I will work it out and who knows what we can do. It’s certainly awesome to be getting back into The Open again.”

“It is probably one of the most memorable experiences I have had (playing at The Open in 2012). Unfortunately I missed the cut by a shot but links golf I have always loved it so playing at Troon is going to be amazing.

“It’s unbelievable. I didn’t think it would be enough coming in. I thought I needed to make a couple of putts in the last couple of holes but I’ll take it. I’m very happy.”

The Open Qualifying Series continues at the Thailand Golf Championship from 10-13 December 2015.