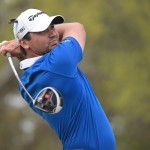 A week after winning the Arnold Palmer Invitational, Jason Day goes back-to-back with victory at the WGC Dell Matchplay

Basingstoke, HANTS (28 March, 2016) – Jason Day has retained his position as the #1 golfer in the world with an emphatic victory at the WGC Dell Match Play. The Aussie won the final 5&4 earning him his 9th career PGA Tour Victory, and his second in as many weeks after picking up the Arnold Palmer Invitational last time out.

What you need to know:

• With his 9th PGA TOUR win and 6th in his last 13 starts, Day retakes the #1 position in the OWGR. He is guaranteed to be #1 heading into the season’s first major championship.

• Depending on the course, Day rotates between a UDI, RSi TP and RSi 2 2-iron. This week he played the RSi 2 2-iron, which is shafted with the same irons he plays in his RSi TP irons (DG X7).

• Day plays a combination of TaylorMade’s new Tour Preferred Satin Chrome EF wedges. While his lofts vary from tournament to tournament, at Austin CC he played a 47* in the Tour Grind and 52* & 58* in ATV grind with True Temper DG Tour Issue S400 shafts.