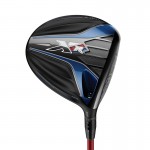 Willett wins impressively with an XR16 driver and a bag full of Callaway clubs, a Callaway ball and an Odyssey putter

CARLSBAD, Calif, April 11, 2016 – Callaway Golf has announced that Staff Professional Danny Willett used its new XR16 Driver in his major championship victory in Augusta, Georgia this weekend. Carding a final round 67 to win by three strokes, Sunday capped an incredible stretch for Willett after becoming a father the week before the event. In addition, Willett had a bag full of Callaway golf clubs, a Callaway golf ball and an Odyssey #1W Versa Putter.

Willett averaged 305 yards per drive Sunday with a Callaway XR16 Driver on his way to winning the green jacket. For the XR16 Driver, Callaway worked with a team of experts at Boeing to redefine what’s possible with aerodynamics and ball speed. Callaway engineered its most forgiving shape ever and Boeing made it fast with a re-engineered Speed Step Crown.

Willett first put his XR16 Driver in the bag in February, and in his 2nd start with it he won in Dubai. In a recent Callaway podcast, Danny said of his driver, “I did a lot of testing with the driver over the winter and I didn’t hit too many balls with it before it went straight in the bag. The new XR technology…it did exactly what (Callaway Tour Reps) said it was going to do. It gave me a little more ball speed and helped me control my ball flight. So it was a win-win.”

What’s in the Bag?