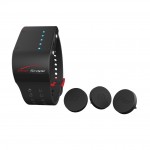 The R&A have ruled that Shot Scope does conform to the Rules of Golf. Importantly, Shot Scope does not breach Rule 14-3. The performance tracking system incorporates a wristband which works in the background, thus not impacting the game, collecting the golfer’s performance data uninterrupted. The unique tags which fit into the top of grips weight only 1.2g and don’t impact on weight or swing. All of these components allow for an uninterrupted game with constant tracking of play and rich data collection. David Hunter, Shot Scope CEO can be quoted as saying: “Shot Scope has captured the interest of a number of professional, elite amateur and college golfers and this ruling will allow those golfers to use Shot Scope in their tournaments and we hope to see Shot Scope used on the top tours very soon.”

This was a timely ruling on the part of the R&A as pre-ordered units will begin international shipment this week (14/05/2016) to golfers in 22 countries and 21 states in the US. Pre-order launched between January and March 2016 to great demand. There was huge interest in the product and technology resulting in Shot Scope being featured on the Golf Channel, BBC, and a number of golf radio shows.

ABOUT US
Shot Scope is a wearable performance tracking system designed specifically for the golfing community. The data made available, through over 100 generated statistics, was previously only available to top tier players. Actionable insights, detailed areas for development and a valuable progression tool allow the golfer to be informed and enables improvement. The band collates information using Bluetooth Smart and ClubSense technology with GPS to provide accurate and in depth statistics with no need for a smartphone or manual inputting. The technology used automatically identifies when a shot is taken, where on the course and with which club. It maps all of the shots taken onto an overhead view of the course. Insights include: club choices and their impact, more information of tee shot performance, deeper understanding of approaches, development of in depth knowledge of short game and an insight into improvements within putting performance.

Integrated with the online community, the band can be used to compare results with friends, compete with other players and monitor the golfer’s own progress.

Shot Scope Technologies was founded in 2014. The product has been developed by an expert team in Edinburgh, Scotland, including a former Walker Cup player.

Shot Scope is a game changer for all golfers. For more information or to reserve a band visit our website shotscope.com. Connect with us on social media: Facebook – facebook.com/shotscope; Instagram – shot_scope; Twitter – @shotscope and LinkedIn – linkedin.com/company/shot-scope.