STRICKER, GAY, HENLEY AND NOH QUALIFY FOR THE OPEN AT THE FEDEX ST JUDE CLASSIC 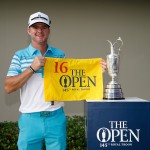 The FedEx St Jude Classic was the sixth event of The Open Qualifying Series, which gives players the opportunity to qualify for golf’s most international major championship at leading Tour events.

The four players will now compete against the world’s best golfers to become Champion Golfer of the Year when The Open returns to the famous Ayrshire links for the ninth time next month.

Stricker, whose best performance in The Open is tied for seventh at Royal Birkdale in 2008, carded a final round 67 to finish in joint second place with 2013 Champion Golfer of the Year Phil Mickelson, and Brooks Koepka, who has already qualified for The Open after finishing in the Top 10 in The 144th Open at St Andrews in 2015.

The former Ryder Cup player picked up three birdies on the back nine to reach 10-under-par for the tournament, three shots behind winner Daniel Berger, who maintained his overnight lead to win his first PGA TOUR event. Berger has already qualified for The Open after finishing in the Top 30 leading qualifiers for the Tour Championship in 2015.

A birdie on the 16th hole secured Henley’s place at The Open, the two-time PGA TOUR winner finishing tied for seventh place on seven-under-par with Noh. The 27-year-old has played in The Open for the last three years and his best performance was tied 20th at St Andrews in 2015.

Former Korean Amateur Champion Noh qualified for his third appearance in The Open, having played in 2010 at St Andrews and 2011 at Royal St George’s. The Zurich Classic of New Orleans champion recovered from a double bogey on the 12th to pick up two shots in the final three holes to secure his place in the starting field at Royal Troon.

“It was fun getting in the mix again. I was a little bit nervous, but I handled it well and enjoyed the moment. I played well today and hit a lot of good shots. I hit a lot of good putts that didn’t go in and I wish I could’ve got a few of those to fall early on. All in all, a really good week and I’m excited about how I played.”

“It’s great to have a good week here and obviously to get into the top four you have to play really well to qualify so it’s good on both ends.

“I’ve won here before and I love the golf course, so I was really focusing on having a good week, knowing that if I did that The Open would take care of itself.

“I haven’t played a ton of links golf, I’ve played in a few Opens but I haven’t been to Troon. It’s definitely different for us. It’s something that’s pretty cool but it can be difficult to get over there and figure it out in just a few days.”

“It’s exciting. My first three years on Tour I think I missed one WGC event and I was in all the majors, this year I wasn’t in the Masters or in the US Open so I’m going the other direction and it’s nice to get into The Open.

“The Open Qualifying Series is a good idea. You want guys who are playing well leading up to the tournament. A couple of years back you would have the guys that would qualify, which was good, but I think you want the guys that are playing well recently which makes for the best field. I’m a big fan of it and it’s definitely been something to play for.”

“I love going over there, it’s a lot of fun to go play a little bit different type of golf than we’re used to and just be challenged. I love the opportunity, I’m excited and I hope I can go over there and play well again.”

“This is my first top-ten this year and I’m so happy with that, especially to make The Open Championship. It’s been very special for me this week. I can’t wait.

“I was trying to win the tournament this week. I missed, but I made The Open so I’m really happy with that. I played in 2010 on the Old Course and St Andrews and then again in 2011 at Royal St George’s but missed the past few years. It’s really exciting to be at Royal Troon.

“I used to play a lot in England and Scotland and when I came to the States a few years ago I really missed playing Europe. I really can’t wait to get back there. “