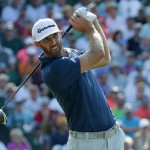 Using power, athleticism and sheer determination, Dustin Johnson put on a tee-to-green clinic en route to earning his elusive first Major championship – adding his name to a prestigious list of U.S. Open champions. His 10th career victory also marks his ninth consecutive season with a win on Tour. With 5 wins for the M Driver family in the last 6 PGA TOUR events, M further solidifies its standing as the most dominant driver combination on Tour.

What You Need to Know:

Johnson’s win is the 8th this year for TaylorMade’s M drivers and 5th in the last 6 weeks (also: Day, Garcia, McGirt & Berger).
Johnson plays a 10.5* M1 driver (set to 11*) with a Fujikura Speeder Evolution 2.0 Tour Spec 661X. He has both weights centered (neutral position). He first put into play at the ’15 BMW Championship.
Johnson’s M1 fairway is a 16.5* HL with both weights toward the toe to help to hit the fade he plays with the majority of his shots.

With the win, Johnson has emerged victorious in each of his first nine seasons on the PGA TOUR (the longest current streak)
Johnson has now finished in the top 12 in eight of his last nine Major championship starts.
To take advantage of Oakmont’s speedy fairways, Johnson swapped his M1 fairway wood 5-wood this week for a UDI #2. He has Project X’s HZRDUS Black 105 on it, which he added just this week.

Johnson’s win marks the 8th win for the TOUR360 Boost this year.

Throughout the week, Johnson wore two different adidas Golf polos, the climacool gradient polo and the climacool performance polo, both of which utilise climacool technology for zonal cooling.

His polos were paired with the ultimate pant, which features a stretch waistband with silicone gripper, moisture-wicking and water resistant stretch fabrication.