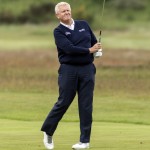 28 June 2016, St Andrews, Scotland: Colin Montgomerie survived an agonising wait to secure a place in The 145th Open at Royal Troon in Final Qualifying at Gailes Links today while Paul Dunne completed a notable hat-trick of victories at Woburn and Matthew Southgate qualified from Royal Cinque Ports a year after undergoing treatment for testicular cancer.

After carding rounds of 66 and 71 at Gailes Links for a five-under-par total, Montgomerie had to wait two hours before learning that he had progressed from the Ayrshire venue through The Open Qualifying Series along with Swede Oskar Arvidsson and Spaniard Scott Fernandez. The 53-year-old year Scot is a member at Royal Troon, where his father James was the secretary, and will play in golf’s oldest Championship for the first time since his 21st consecutive appearance in 2010.

Arvidsson shrugged off his lowly world ranking of 1,418 to win the Gailes Links qualifier by four shots with a 10-under-par 132 total after rounds of 64 and 68. The 25-year-old ignited his day to remember on the Ayrshire coast by rolling in a 25-foot eagle putt at the first and dropped only one stroke all day. Fernandez, a 23-year-old from Grenada with a mum who hails from Kidderminster, qualified at the first attempt on six-under-par and revealed his ambition to play in The Open had been fuelled by watching The Open at Royal Troon in 1989 on video.

Ireland’s Dunne, the 23-year-old from Greystones, carded a flawless four-under-par 68 in the morning and then added a 67 in the afternoon to post a nine-under-par total of 135 on the Marquess course at Woburn. Dunne will now have the chance to build on his fine performance at The Open last year when he shared the 54-hole lead before closing with a 78 to drop into a tie for 30th place, nine shots behind winner Zach Johnson.

Dunne’s nearest challenger was his playing partner Ryan Evans who matched the Irishman’s 68 in the morning and then survived a double bogey on the 16th in the afternoon to card another 68 and finish on 136. The final place went to European Tour veteran Robert Rock who finished tied-seventh in The Open at St Andrews in 2010. Rock closed with a fine six-under-par 66 and then beat Aaron Rai with a par on the first hole of a play-off after the Challenge Tour player three-putted from the front edge of the green.

Southgate won the Royal Cinque Ports qualifier on six-under-par, having also won at Sunningdale two years ago before missing the cut on his debut in The Open at Royal Liverpool. Last year during the week of The Open at St Andrews he underwent cancer surgery. He recovered to regain his European Tour card at the Qualifying School then, in May, was in tears at the Irish Open after finishing fourth, his best ever result on the circuit. After a morning 70 at Deal, he eagled the third hole in the afternoon as he went out in 31. Then he came home in level par in the worst of the wind on the fearsome back nine for a 66, the lowest second-round score by three shots.

Also qualifying at Deal, three strokes behind on three-under-par, were England’s James Heath and New Zealand’s Steven Alker. Heath, following his victory in the Scottish Hydro Challenge, had an eventful second-round of 70. Four birdies and an eagle put him at eight under par after seven holes but three bogeys and two double bogeys left him one under with three to play. The former Faldo Junior Series winner rallied with birdies at the 16th and 17th holes to book a place in his first Major Championship. Alker, who took a break from the Web.com Tour in America to try to qualify, had rounds of 68 and 71 to play in The Open for a fourth time and a first appearance since finishing in the top-20 at Royal Lytham & St Annes four years ago.

Jack Senior shot 69-70 to lead the qualifiers at Hillside on five-under-par 139, leaving five players to play-off for the two remaining places. The Challenge Tour player from Heysham in Lancashire had a rollercoaster day, with two double bogeys on the short 10th and eagle and ten birdies in his two rounds. Starting at the 10th in the morning he was out in 38 and reduced the front nine to 31on the way home. Then in the afternoon it was a total reversal. He was seven strokes worse than in the morning over the front nine and six strokes better on the back nine.

Hull amateur Steven Robins was first to lose out in the play-off with a bogey at the first, then Boston professional Dave Coupland claimed the first place with a birdie at the second play-off hole, the ninth. It will be the second time the 30-year-old has played in The Open having led the qualifiers as an amateur at Monifieth for the The Open at Carnoustie in 2007. Paul Howard, a 25-year-old from Southport and Ainsdale, took the third and final play-off spot at the fourth extra hole sinking a birdie putt from seven feet to end the hopes of Scott Arnold and Jay Taylor.

“If I was going to play one Open, it would be this one as my qualifying days are behind me after this. I’ll never play another at Troon because it comes back, what every 12 years, and I’ll be gone by then, so this gives me an opportunity to play and I think I can say this meant more to me than, with all respect to everyone else, to anyone else playing here. I’m glad that I made a reasonable showing today because you can go around in two 75s and not make a good showing.”

“That is the best I have played in a tournament. I love links golf. I first came over here for The Amateur in 2010 and have enjoyed playing this type of golf ever since then. It is great to have qualified for The Open as that is the major I wanted to play in most. I won’t be going to Royal Troon with any real expectations. I just want to have fun.”

“This has been my dream since I was a little kid and used to watch a video of the 1989 event every morning. It was the one that Mark Calcavecchia won in a play-off, beating Greg Norman and Wayne Grady. It is fun that I am going to be playing in the event there, too, now. I only turned pro in December so this is the toughest test I have faced over the finishing stretch.”

“I love the course and I always seem to play well at this time of year. Hopefully this is the last time I have to qualify because it’s been very nerve-wracking.

“I’m happy to get through. After putting myself in the position I was in last year it would have been very hard to watch this year’s Championship from home. It’s a bit of a relief to be honest. The good news is I’m definitely a better player than I was last year. I was a much better player last year than I was at Hoylake two years ago and I think I have improved again.”

“I played really well to be fair. It helped playing with Paul (Dunne) today. All my friends were saying if you beat Paul at Woburn you’ll qualify because he’s got such a good record here. I didn’t beat him but I was close enough. I can’t wait to get to my first Open. I been struggling a bit on the Tour this year but this is a big boost and hopefully can kick-start my season. I’ve tried to qualify twice before. I came here last year and double-bogeyed 16 to miss by two. Thank goodness that didn’t happen again.”

“It’s been a long day but a successful one. It’s a shame it had to finish with a play-off between two players and one getting nothing out of it but that’s golf I’m afraid.

“It means the world for me to get back into The Open. It’s been a few years since I’ve made it (2012). I’ve had two good results in the past. I finished 7th at St Andrews in 2010 and tied 16th at Hoylake in 2006 so hopefully I can do something like that again. This is what my whole year is about. When I don’t get into The Open I class the year as a bit of a failure so it’s great to be back in.”

“I’ve been so focused on the golf that I haven’t thought about where I was this time last year until now. It’s a long way to come and I’m well chuffed. I played at Hoylake two years ago and can’t wait to go back and play again. The experience I got from that and finishing fourth at the Irish Open, playing with the crowds and the occasion, I hope to play well.”

“It means so much to play in The Open, I’m delighted. I thought I’d blown it but came back strong and showed a lot of resilience. I’ve never played a major and never played at Troon so I’m looking forward to it. I’ve got a lot of confidence after the win but I know I have to work on my game. It’s been ten years between wins on the Challenge Tour and it’s a long time. I did a lot of different jobs like working for my dad’s heating firm or for a marketing company last winter to get some pocket money to keep me going.”

“I’m chuffed, it’s going to be my fourth Open and it’s pretty exciting. I’ve taken time off from the Web.com Tour in America to come over and qualify because I love links golf. Now I’ll stay over and play more links golf and then head to Troon — I haven’t been there since the Scottish Amateur Stroke Play about 25 years ago. I had a good finish at Lytham last time I played in 2012 but I like all the courses on the rota, though Carnoustie is probably my favourite. But that back nine today was about the toughest I’ve ever played. I putted really solidly and that got me through.”

“It’s great to make it into The Open for the first time. Something every golfer always dreams of. I’m off to Denmark for a Challenge Tour event this week, then have planned to have next week off, which is just perfect leading up to Troon.”

“At the second play-off hole, I hit my three-iron off the tee fat but then hit a great four-iron to 12 feet and sank it. It’s great to make it through again and I’ll be able to make some money this time.”

“I hit seven-iron off the tee and probably one of the best eight-irons I’ve ever hit on the fourth play-off hole. It hasn’t quite sunk in yet how good it is to make it to my first Open. But I know everybody that’s helped me on the way with be delighted.”