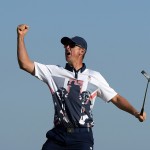 14 August 2016, Rio de Janeiro, Brazil: It took 112 years for
golf to find a new Olympic champion, but it was well worth the wait.
Great Britain’s Justin Rose followed in the footsteps of the
long-departed George Lyon of Canada when he climbed onto the podium to
collect the Olympic gold medal in Rio de Janeiro.

On a sun-drenched final day, in front of a sell-out crowd of 12,000
at Reserva de Marapendi Golf Course, Rose added the Olympic crown to his
2013 US Open title after a prolonged and exciting battle down the
stretch with Sweden’s Henrik Stenson.

In the end, the packed grandstand which turned the 18th arena into a
noisy sporting amphitheatre, watched spellbound as Rose got up-and-down
from the side of the green for the birdie which sealed a worthy gold
medal performance.

Stenson, who knew he needed to hole a 25-footer of his own to force a
play-off, three-putted and the first Olympic golf competition since
1904 had a new champion.

Stenson, who emerged on top after a similarly epic shoot-out with
Phil Mickelson in The Open at Royal Troon last night, had to accept
second place this time and the silver medal was a deserving reward for
his part in a wonderful spectacle which saw Matt Kuchar of the United
States claim the bronze medal after a course record-equalling last round
of 63.

Rose finished with four rounds in the sixties and his closing 67
secured the gold medal with a 16-under-par total of 268. Stenson took
silver with a fourth-round 68 for 270 and Kuchar’s swashbuckling last
day brought home the remaining medal on 271.

The leading three players completed the 72-hole test detached from
the rest of the field, in which Belgium’s Thomas Pieters finished a
highly creditable fourth after slicing 12 shots off his third-round 77
with a final day 65.

After holing out for a birdie four on the 18th, Rose
punched the air in celebration and fell into the arms of his wife, Kate,
before savouring the medal ceremony as the Olympic golf champion.

“Olympic gold medalist – It sounds absolutely incredible,” said the
36-year-old. “I was on that last green, just sort of pinching myself
and taking myself back to the quote that I had given about the Olympics
all along – that I hoped my resumé one day read: ‘multiple major
champion and Olympic gold medalist’ and if that happened then I’d be a
very, very happy man. I pretty much just need the multiple major now,
but for the most part, I’m there on that quote.

The final round in Rio delivered the anticipated head-to-head between
two outstanding major champions. And both men held a narrow lead at
different times as they exchanged birdies.

It seemed that Stenson might repeat his Open victory at Royal Troon when he edged in front due to a Rose bogey at the 13th, but he handed back the initiative to the Englishman when he bogeyed the 14th and Rose knocked in an eight-footer for birdie on the 15th.

Despite both men missing the green at the last, it was Stenson who
blinked first, hitting a weak chip to 25 feet while Rose struck a deft
chip close to the hole for a cast-iron birdie four.

Stenson recognised the quality of the golf on display on the final
day and admitted: “When you’re in good position to try and win, you
always kind of feel a little disappointed afterwards. But at the same
time, we said that all along in the Olympics, you’ve got some pretty
good consolation prizes.

“I guess if you would have asked me before the week that I would
leave here with a medal, I would have been pretty pleased and I managed
to do that. I’m quite happy, I didn’t feel like I played my absolute
best throughout the week but I played good enough to put myself in
contention and that was my goal. Once I was up there, I played pretty
well but I needed to play one or two shots better to win it today. “

Rose paid tribute to his rival and friend by saying: “I just said
today that I had to out?Stenson Stenson. I knew I wasn’t going to get
much from him at all. Obviously the bogey at the last only came because
he had to force the putt in.

“But he is unbelievable. He’s relentless and a great player, and I
can’t wait to be on the same team as him in The Ryder Cup. He’s a great
player and he’s a great friend, and I just gave him a hug on the 18th
green and he was as gracious as ever. I just said to him, ‘Great summer –
winning The Open Championship’, I was so pleased for him. There are
very few guys are you really genuinely, genuinely happy for, and Henrik
is one of them.”

Bronze medalist Kuchar just came up short, despite equaling the
record 63 set by Australian Marcus Fraser on Thursday. Had he not three
putted the 16th and failed to birdie the 18th, he might just have grabbed another colour of medal.

The American Ryder Cup player said: “It’s just an amazing week. It’s a
boyhood dream come true. I keep expressing the feeling of sheer pride.
I knew when I was out there playing that I was in third place. I
certainly didn’t want to lose that but also wanted to keep pushing
forward.

“While I was out there, playing that back nine, the sense of being an
Olympic medalist really hit me. There were times I kind of had to back
off a few times and regather my thoughts and composure to make sure I
try to continue to hit good shots and keep making birdies.”

Quotes of the Day

JUSTIN ROSE: “I think it sits alongside the US Open
trophy for me, for sure. I think people want to keep comparing the
two, major championship or Olympic gold, I don’t think they should be
compared to one another. I said earlier this year that if my resumé one
day read “multiple major champion and Olympic gold medalist,” I would
be a very, very happy man. Just going to tag on another major now.”

HENRIK STENSON: “You play for your country and I
think I did that pretty well today. It was always going to be a
battle ?? or I was hoping it was going to be a battle with me and Justin
for the gold and the silver, and it was in the end. I think we both
pleased to be a couple of shots ahead of Matt there coming into the last
couple of holes, and it was down to the last hole and Justin just swung
that a little bit quicker than me up the 18th (laughs).”

MATT KUCHAR: “I grew up a fan of sport. I had the
dreams most boys have of hoping to compete in an Olympics, hoping to win
a medal. The sport I ended up choosing was the sport that through my
lifetime has not been an Olympic sport. When it did become an Olympic
sport, the lights went off and said, how amazing, I can’t believe I now
potentially have the opportunity.”

JUSTIN ROSE: (on using a picture of Michael Phelps for motivation)
“I think the picture sort of circulated on social media a little bit. I
think Michael Phelps is literally just doing his stroke, eyes forward,
and then there’s a guy to his right kind of looking at him. You know,
part of our mentality was just to keep our eyes forward and play as hard
as we could and take care of our business. That’s what Henrik does so
well. I knew that would be a strategy that wouldn’t necessarily give me
an advantage today but it would kind of ? it was something that was
going to be very, very useful. It was a nice, powerful image on which
to work off.”

HENRIK STENSON: (comparing Olympic atmosphere to a major championship) “It
is slightly different and I don’t think you necessarily need to
compare, either. It’s a whole new experience for us as golfers,
participating here, and it’s been a fun one. I’m really happy I went.
It’s memories of a lifetime being here competing, and we’re competing
for our countries more than we do normally in a way. Yeah, it’s been a
nice ten days in Brazil.”

MATT KUCHAR: “To look at the support that was out
here, to look at the guys that came through, won medals, I think it
speaks for itself. This event has gone over I think fantastically
well. Amazing support from the crowds. I wasn’t really sure what to
expect as far as golf in Brazil. I didn’t think that it would have
great support and it really did. If you take the broadcast and then look
at what a great showdown to have these two guys battling down the end.
I don’t know that it could have gone much better for the game. It’s a
clear winner to move forward.”

To find a full list of player transcripts from the Olympic Games golf competition, visit: