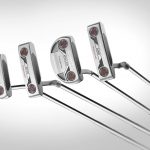 Basingstoke, Hants. (18th October, 2016) – TaylorMade Golf Company announced today the forthcoming release of an entirely new line of putters, named the TP Collection, landing in March/April 2017. Comprised of 6 distinct models, five of which feature a 303 stainless steel construction for solid feel and skim-milled machining for exacting contours, the TP Collection utilises new materials and new milling processes not only to enhance the aesthetics of each putter, but also to improve the product’s performance.

nspired by the insert played by the #1 & #2 golfers in the world Jason Day and Dustin Johnson, each TP putter employs TaylorMade’s new Pure Roll insert for improved roll. The insert combines 45° grooves with a softer polymer to promote better forward roll and reduce skidding across varying surfaces. The composition and construction of the Pure Roll insert is specially engineered to bring the grooves into direct and active contact with the ball during impact, even on short putts. The grooves in the face also serve in part to strategically soften the insert’s structure. Together, these factors make the insert perform at a very high level.

The new naming convention for the putters within the TP Collection draws inspiration from areas, regions, and landmarks of some of the world’s greatest golf destinations and historic courses.

Juno and Soto are classically designed blade putters with heel-toe weighting for optimized balance, control and feel. The Juno (first played by Sergio Garcia in Hazeltine at the Ryder Cup) features longer squared off contours with a single sightline on top. The pads also have fine linear machine lines. The Soto retains short, rounded and soft edges with a single sightline in the back cavity. Each blade-style model comes stock with a plumber’s neck hosel. The Soto hosel has a classic scalloped hosel for a slightly lighter weight. Both heads feature two 10 gram weights in the sole.

Mullen and Berwick make up the classic mallet tour proven models of the TP Collection. Mullen boasts a more compact mallet design with two sightlines on the back cavity and a short “S” hosel that allows for a slight toe hang of 38 degrees. Berwick is the more traditional rounded mallet shape with a thicker topline and single sightline on the back cavity. Berwick also includes a slight step-down cavity and a single bend ¾ shaft offset to create a face-balanced hang. Both mallets feature two 5 gram weights in the sole.

Arriving in 2017, Ardmore and Chaska add mid-size modern mallets to the TP Collection. Ardmore features a deep cavity with dual sightlines to improve balance and alignment. The Ardmore is 355 grams and cast from 303 stainless steel for a larger MOI. The shaft is a double bend with ¾ offset, face balanced with 3.5 degrees loft. The Tour proven Chaska revisits the design of the original TaylorMade Corza Ghost with the familiar circular alignment aid in the back of the putter and three sightlines on top. The Chaska is also face balanced and has ¾ shaft offset. Both mid-size mallets include the precise milling and Pure Roll insert associated with the TP Collection of putters.

Four of the six models; Juno, Soto, Mullen and Berwick are available at retail in March 2017, with the Ardmore and Chaska coming in April 2017. The entire TP Collection is available in 34″ and 35″ lengths. Each putter comes equipped stock with a Lamkin Sink Rubber grip and an optional upgraded Super Stroke 1.0 GT Pistol grip.

Pricing is to be confirmed.