Driven by Performance, Rory McIlroy Begins Next Phase of Career by Choosing to Play Full Bag of TaylorMade Equipment 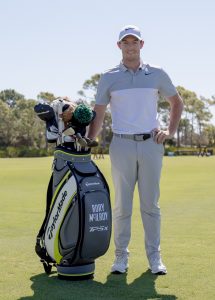 Basingstoke, Hampshire (9th May, 2017) – TaylorMade Golf Company announced today that four-time major champion and two-time PGA TOUR Player of the Year, Rory McIlroy, has chosen to sign a long-term agreement with TaylorMade after testing with nearly every major club manufacturer.

With his new full bag plus golf ball deal, McIlroy joins a Tour staff that now includes the top three players in the world and 6 in the top 12 of the OWGR. The signing of the 28 year-old Northern Irishman is yet another decisive move by the company that reaffirms its commitment to fielding the strongest Tour staff in the industry and putting the highest performing equipment in the hands of the best players in the world.

McIlroy joins Team TaylorMade with an impressive CV of accomplishments that already puts him in an elite class of golfers and rivals any active player on Tour. As one of the most tenacious, performance-driven players the game has ever seen, the 13-time PGA TOUR & 13-time European Tour winner is looking to reclaim his position as the #1 player in the world with an arsenal of new TaylorMade products in the bag as he embarks on the next stage of his career in pursuit of his fifth major championship and beyond.

“My future rests firmly in my hands – that’s why I choose TaylorMade. I’ve been around the game long enough and have tested most clubs on the market, but I have never been as excited about equipment as I am right now.”