Phil Mickelson eclipsed a moment of magic from Justin Thomas to beat his compatriot in a play-off at the WGC – Mexico Championship and secure his first title since winning the Open in 2013.

The American pair finished tied on 16 under par after an enthralling final round at Chapultepec Golf Club.

Mickelson saw his birdie putt lip out at the first play-off hole – the par three 17th – but when Thomas failed to get down in two from behind the green the 47 year old had his first victory in almost five years. 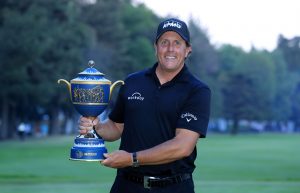 MEXICO CITY, MEXICO – MARCH 04: Phil Mickelson of the United States holds the Gene Sarazen Trophy after his play-off win during the final round of the World Golf Championships-Mexico Championship at the Club de Golf Chapultepec on March 4, 2018 in Mexico City, Mexico. (Photo by David Cannon/Getty Images)

England’s Tyrrell Hatton, who missed out on extra holes after a bogey at the last, and Spain’s Rafa Cabrera Bello tied for third on 15 under.

Cabrera Bello had made the first move on Sunday when he chipped in from a bunker for eagle at the first to catch overnight leader Shubhankar Sharma before the Indian had even teed off.

The Spaniard, Hatton and Mickelson all had spells in front but Thomas, who was 11 shots behind halfway leader Sharma on Friday night before carding a blistering 62 on Saturday, made six birdies in his first 15 holes to edge ahead.

A bogey on the 17th looked to have derailed his challenge, but Thomas spun his 120-yard approach back into the cup at the 18th to set a daunting clubhouse target with a round of 64.

Hatton joined him when he followed a birdie on the 14th with an eagle from 11 feet on the 15th, while Mickelson birdied the 15th and 16th before his 25-foot effort on the next missed by a whisker.

With both needing a birdie on the last, Hatton and Mickelson miscued their approaches and the former was unable to get up and down, but the five-time Major winner held his nerve from five feet to seal a closing 66 before a par at the first play-off hole saw him become the oldest winner of a World Golf Championships event.

Sharma shot a closing 74 as the Race to Dubai Rankings presented by Rolex leader marked his WGC debut with a tie for ninth.

Phil Mickelson: “I can’t put into words how much this means to me, it’s been a long time. To come here to Mexico City with the fans here and play against the best players in the world and finally come through… I knew it was going to come soon, I was playing too well for it not to but you never know until it happens.

“My game is starting to get to a level that is some of my best golf and it seems like it’s just in time. It’s nice to be in that small circle called the winner’s circle; I haven’t been in it for a while.”

Justin Thomas: “I’m definitely disappointed. I wish Phil’s putt just would have gone in so I would have felt better about myself. But I was a little pumped up and the gap wedge went a lot farther than I thought it was going to. But man, there’s nothing for me to hang my head about. To even have a chance to win this golf tournament after where I was through 18, through 36 holes, I’m very proud of myself. I think it’s the most maturity and kind of poise I’ve shown in a tournament I’ve ever played.”

Rafa Cabrera Bello: I felt I played good, I’ve been in contention, I played good today as well. Maybe one or two mistakes, but I mean, I by no means feel that I lost anything. I’ve kind of always been in the hunt, a couple, one or two a few back from the leaders. Unfortunately, that’s how it’s going to finish. But overall pretty pleased. A very good performance.

Tyrrell Hatton: “It just felt like I was pretty unlucky today in general, especially on six. It was a really poor drive but I was right up against the tree. Then Phil hits the same drive, hits off a tree and comes back near the fairway and he gets on the green in two. So guess you need breaks like that from time to time. Felt like I got unlucky down 11 as well, another par five. Didn’t hit a bad shot there and walk off with six. Just wasn’t my day today.”