CARLSBAD, Calif. (July 29, 2021) – Revolutionary changes in the evolution of the Titleist T-
Series advances the company’s mission of producing the world’s best irons. Titleist has been
the most played iron on the PGA Tour for 16 of the last 17 years, including each of the last seven
seasons. Not only is Titleist on pace to extend its favored status on the PGA Tour, the T100
continues to be most played iron model by the world’s best since its tour introduction at the
2019 U.S. Open.

“The new T-Series irons represent another step forward in Titleist iron design and technology,”
said Josh Talge, Vice President, Titleist Golf Club Marketing. “With these new irons, across
the board, every detail matters. They provide the best precision and performance in their
respective iron category with stunning aesthetics and feel. Golfers don’t buy an iron ‘line’, they
want specialization, and that’s what each of these models offer.”

“T-Series irons are designed to provide precise control for any player who wants to score lower,”
said Marni Ines, Director, Titleist Irons Development, Golf Club R&D. “From form to feel to
function, every aspect of these irons is crafted towards the golfer being consistent from their
first shot to their last throughout every round. Whether it is the T100, T100•S, T200 or T300,
every iron is individually engineered to help the golfer deliver a strike where they can see and
feel pure performance.”

For the better player who is looking for precision control and unrivaled feel.
The refinements found in the new T100 model are the product of continuous feedback from
some of the best iron players in the game, including Jordan Spieth, Will Zalatoris,
Sungjae Im, Cameron Smith, Garrick Higgo and Jessica Korda, among many others. It
is the most played iron model on the PGA Tour for a reason – and with tour-validated
improvements – now has even more reasons to stay on top. A ‘player’s iron,’ the new T100 offers
more precise flighting and control, fully forged feel, a more versatile sole design, and plays like
the commanding and consistent field favorite it is on tour. The T100 irons are designed with a
new Tour-preferred brushed chrome finish.

T100 | PERFORMANCE AND TECHNOLOGY
New Tour-Designed Sole: By working with select tour professionals and in collaboration
with the Vokey Design wedge team, Titleist engineers developed a new variable bounce
design – less bounce in the heel and more bounce in the toe – that provides better turf
interaction and improved feel. The design has been overwhelmingly validated by some of the
world’s best ball strikers.

Better Tungsten for Better Balance: Utilizing a denser version of tungsten (D18)
weights in the heel and toe of the 3-7 irons for greater mass efficiency, and a brazing process
used in aerospace construction, Titleist engineers were able to eliminate weld points and be
even more precise with CG placement and produce high MOI in a ‘player’s iron.’
QUOTING MARNI INES: “What sets these irons apart from the competition is the
precision and feel they provide the golfer. Irons are scoring clubs and it is important to the
T100 player to hit their number and hit it more consistently. With that as a priority, we took
the best performing iron in the game and made it better by adding high density tungsten,
which is the engine of our iron designs. It allows us to put the CG where it needs to be,
provides stability and builds up MOI. The way this new T100 is engineered also allows us to
keep that blade-like profile these golfers desire which is so important for confidence when
looking down at their club.”
.
STEEL FEATURED SHAFT: True Temper AMT Tour White
Ascending Mass Technology: 3g per club (106-130g)
Low launch, low spin
GRAPHITE FEATURED SHAFT: MCA Tensei White AM2
Ascending Mass Technology: 2g per club (94-108g)
Low launch, low spin
GRIP: Golf Pride Tour Velvet 360 with white paint fill and black flat cap
PRICING: $186 MAP/club and $1,299 MAP/7-piece set (Steel)

T100•S | THE FASTER TOUR IRON
For the player who wants the exact look and feel of a Tour iron, but wants to hit it
farther
The T100•S now boasts an even closer connection to everything the world’s best players prefer
in the T100 – only more. Featuring a fully forged feel, Tour-shaping, a more versatile sole
design, and precise flighting – the new T100s is engineered with 2* stronger lofts and a new
Muscle Channel that produces enhanced ball speed and launch while preserving precise touch,
control and stopping power. It’s the Faster Tour iron.

T100•S | PERFORMANCE AND TECHNOLOGY
Same Tour Shape. Only Faster: The new T100•S head dimensions exactly match the
specs of the T100, with the exception of being engineered – not bent – 2* stronger. The
T100•S features the same fully forged face, backed by an innovative Muscle Channel
that adds both speed and launch. At impact, the T100s feels amazingly similar to the T100
with the only difference being added distance.

Refined for Greater Consistency: Like the T100, the new T100•S face features a
continuous cradle construction that creates a seamless striking surface and more
uniform leading edge. This small, but impactful shift, separates the precision of Titleist irons
production from the competition. A proven, fully forged, dual cavity supports the face
construction. The 3 through 7-iron faces were redesigned to impart slightly more spin for
improved shot-shaping and increased control. The 8-W are forged with one-piece 1025
carbon steel. 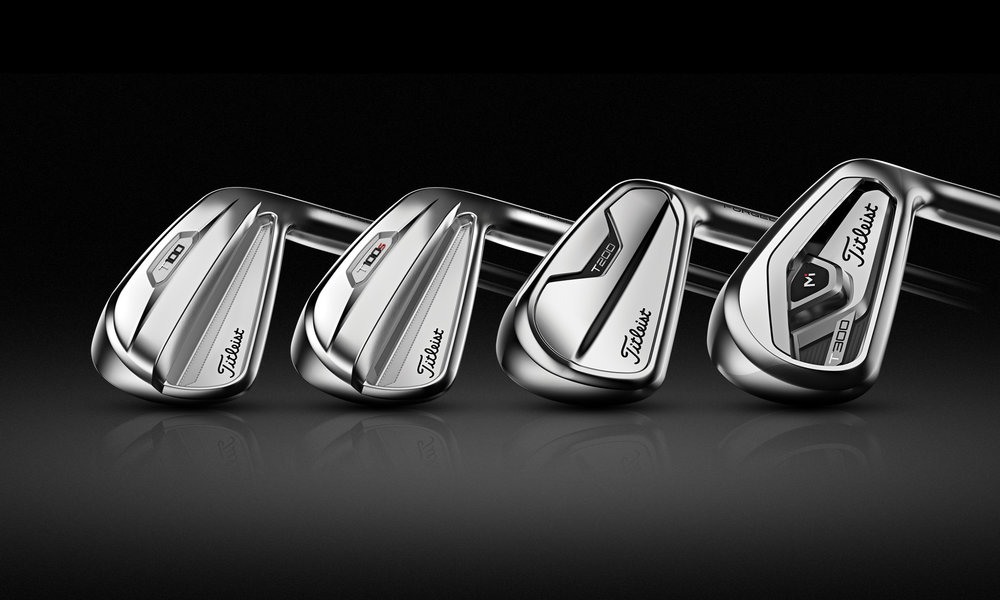